Retirements and Pensions can't be paid.....Have a plan B ?

California Spending May Doom The Boom

California has had its share of calamities in recent years: Drought, followed by massively heavy rains. Multiple secession movements. A sharp demographic and economic split between the wealthy coastal elites and rural inland dwellers. Soaring pension liabilities. The departure of thousands of the state's businesses.

But none of these have been as disastrous as California's self-inflicted fiscal wounds, which have made the state's finances not only highly volatile but threaten the state's very future as a center of innovation and technology.

That might seem surprising, given that California is in the midst of an epic tech and real estate boom, with both Silicon Valley and Southern California's Silicon Beach flourishing in tandem.

High-end jobs are growing, more billionaires are being made, real estate values have again reached stratospheric levels, and China is buying and building commercial skyscrapers in downtown Los Angeles like there's no tomorrow. If it were a sovereign nation, California's $2.5 trillion economy would make it the sixth-largest economy in the world.

Yet California's top marginal income tax rate of 13.3% remains the highest in the nation. Last year, it ranked dead last in Chief Executive magazine's "Best and Worst States for Business" survey for the 12th year in a row. And the state got an "F" in Thumbtack.com's "2016 Small Business Friendliness Survey."

Middle-income workers have left in droves, seeking lower living costs, more-affordable housing and job opportunities in nearby states. From 2004 to 2013, 5 million Californians departed, while just 3.9 million people moved in from other states, a net loss of more than 1 million in population. California's population still grew overall, due to immigration and in-state births. But those who left took a net $26 billion in annual income with them.

Businesses are also skedaddling. Last year, business relocation firm Spectrum Location Solutions said that since 2008 nearly 10,000 companies either had left the state or cut back on investments, due largely to its tax and regulatory policies. And a planned hike in the state minimum wage to $15 an hour, which could destroy 600,000 jobs, will only make the business exodus grow.

The reason for all this, economists largely agree, is the state's fast-growing budget and the tax and regulatory policies that feed it.

This year, Democratic Gov. Jerry Brown, who has led the state for 16 of the last 43 years, unveiled a 2018 budget calling for $179.5 billion in spending, a 53% increase since just 2010. And, in a surprise, Brown said he expects a $1.6 billion deficit, in large part because tax revenues are lower than expected.

How can that be? As Brown suggests, the state's budget has become nearly unpredictable because it relies heavily on personal income taxes of wealthy Californians, much of it capital gains and other one-time income boosts.

In 2014, just 144,000 wealthy individuals out of nearly 40 million Californians paid half of all the taxes. 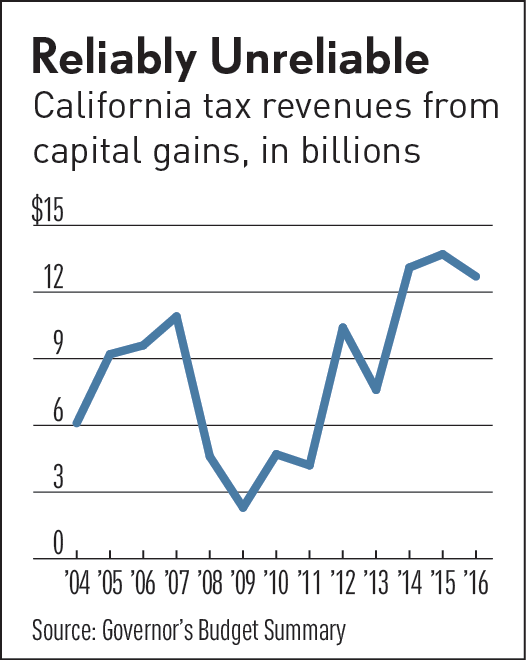 That may sound like a progressive paradise, but one bad year in the stock market — capital gains are a critical part of the state's revenue base — can wipe out a planned budget surplus. As the chart shows, capital gains revenues are highly volatile and unpredictable.

The problem is so bad that debt-rating agencies have warned the state about its overdependence on its wealthiest citizens, in particular the volatile tech industry, for its tax base. Because of this, Moody's Investors Service last year rated California as one of two states "least prepared" to weather a recession. (The other was fiscal basket-case Illinois.)

Worse, actual spending in California next year is expected to be closer to $284.5 billion, thanks mostly to $105 billion in federal spending in the state. Now home to one-third of all U.S. welfare recipients, millions of illegal immigrants, and a fast-growing Medicaid population, California depends on federal money for 37% of all its spending.

Long-term costs — some of avoidable, some not — just keep piling up. Just maintaining the state's most basic physical and social infrastructure will be enormously expensive. But there's a major conflict: This year, California will spend more than 80% of its budget on welfare, education, health care, pensions and interest.

Some Californians want to add even more government, pushing for a single-payer health care plan for the state — even though the state's budget analyst eight years ago estimated the cost would be an added $40 billion a year, even after imposing a steep health care tax on Californians and pooling what the state now spends on health care.

As the debate over increased social spending goes on, recent heavy rains that flooded much of the state demonstrated that California has put off dealing with a massive amount of basic maintenance and infrastructure repair. And those costs are mounting.

After California's huge Oroville Dam, the tallest in the nation, developed cracks and holes in its spillway, Brown admitted that the state has close to $187 billion in unmet infrastructure needs. He's hoping to get the federal government to fund at least $100 billion of that.

But this is an old story. For years, the state has spent massively on social programs, education and health care, while critical infrastructure spending has often been deferred into the future. Oroville's dam scare is a case in point. Warnings were made 12 years ago that the giant reservoir needed repairs. They went unheeded, leading to near-disaster this winter.

Gov. Brown seems to have taken the scare to heart. If the state fails to rebuild its creaking infrastructure, he warned in late February, an "apocalypse and absolute disaster ... is a real possibility."

What Brown didn't say is that California's infrastructure deficit will get worse, in part due to lavish planned spending on Gov. Brown's pet project, a "high-speed" train that is now expected to cost $68.4 billion, more than twice the $32.8 billion originally estimated. Other infrastructure, like water storage, bridges and roads, get short shrift.

The Other Gov. Brown

There's an irony in this. Under Jerry Brown's father, the late California Gov. Edmund G. "Pat" Brown, about 20% of California's budget went to infrastructure spending. This is why the 1950s and 1960s are often remembered as the state's golden age.

Today, under the younger Brown, infrastructure spending makes up less than 3% of the total, not enough to sustain California's huge economy, say economists.

"California ... made remarkable transportation and water infrastructure investments in the 1960s, but those investments are not being adequately maintained nor expanded," wrote Nobel Prize-winning economist Edward Prescott and UCLA economics professor Lee Ohanian in a scathing article last July.

The economists noted that not only was California's road network ranked second worst in the country by the Reason Foundation, but the bad condition of the state's roads now cost drivers $44 billion a year in unnecessary costs — a kind of deferred maintenance tax that everyone pays.

Worse, despite prolonged periods of drought, the last major water project completed was the California Water Project in 1960.

Since 1970, some 15 water-related bonds have been passed, but nothing has been added to the parched state's water storage. With the population having doubled since then, water infrastructure — both flood control and storage — is severely out of date.

Another big problem is the state's questionable estimates for what it owes long term, which rarely gets aired in the public debate.

Officially, the state estimates its long-term indebtedness at about $26 billion, a manageable amount for a state of 40 million people.

But some budget and watchdog groups question that number, saying that when you count up all the liabilities likely to be incurred from current budget promises, the indebtedness soars to over $400 billion.

Then there's California's public employee retirement system, known as CalPERS, the largest public investment fund in the country, and its smaller twin, CalSTRS, the teachers' pension fund. CalPERS and CalSTRS are now $1 trillion underfunded, based on market value, according to a study by Stanford University's Kersten Institute for Governance and Economic Policy Research. That's $93,000 per household.

The amount of underfunding has soared 157% since 2008. Californians don't seem to realize it yet, but they will be hit with huge tax hikes in coming years to pay for this — either through actual increases in taxes paid, or by squeezing other spending to fill in the budget's widening pension hole.

Due to poor returns on pension investments, Brown has asked for $5.6 billion in next year's budget for pension underfunding. That amount will only grow in coming years, and at a rate much faster than the rest of the budget.

In a state dominated by politicians funded by public employee unions, the pressure will grow on the Democratic legislature to "do something" about the public pension funds' mismanagement, poor performance and exploding future liabilities. Benefit tweaks have not come close to solving the problem. That likely means higher taxes on all Californians.

And yet paying for all the added spending that the state wants now, to a shocking degree, depends on the highly erratic flow of capital gains revenues into the state's coffers.

The next downturn will leave the state's budget exposed. Far from California having solved its chronic issues with red ink, the recent surge in tech activity and a capital gains boom has merely covered it up. California's tax code, on which almost all outside experts, budget analysts and economists agree, is outdated, ineffective and a recipe for fiscal disaster.

Eventually, just like the federal government, California will have to reform its tax code to be less reliant on a few wealthy people, and instead boost the number of taxpayers who have "skin in the game." That means flatter, lower taxes, but probably new taxes on things that now aren't fully taxed — including services.

"The progressivity of the California tax code is what causes volatility," said James Hamilton, an economist at the University of California, San Diego. "There's a trade-off between saying we want to get revenue from capital gains and saying we want steady, predictable revenues."

Hamilton notes that many proposed fixes, such as an increase in the sales tax, or gasoline tax, or a new tax on services, would "be more regressive, hitting lower income people hardest."

Given the California budget's ravenous appetite for revenues, some kind of tax reform to broaden the tax base will be the only workable solution, say analysts. In the meantime, Brown, to his credit, has begun setting aside money for a "rainy day" fund for budget emergencies.

This year, the fund is forecast to be about $8 billion in size. But just eight years ago, California faced a single-year deficit of $21.5 billion. Is $8 billion enough?

And a bigger question looms: Will it be politically possible to reform taxes? In California's notoriously liberal political environment, it may be tough. But given the harsh reality of the Golden State's structurally imbalanced budget and its threat to the state's economic health — including its vaunted tech and biotech sectors — the dream of a rational tax code may yet become a reality. After all, it's California.